My Insights on Relationships from Will: Red Table Talk with Jada 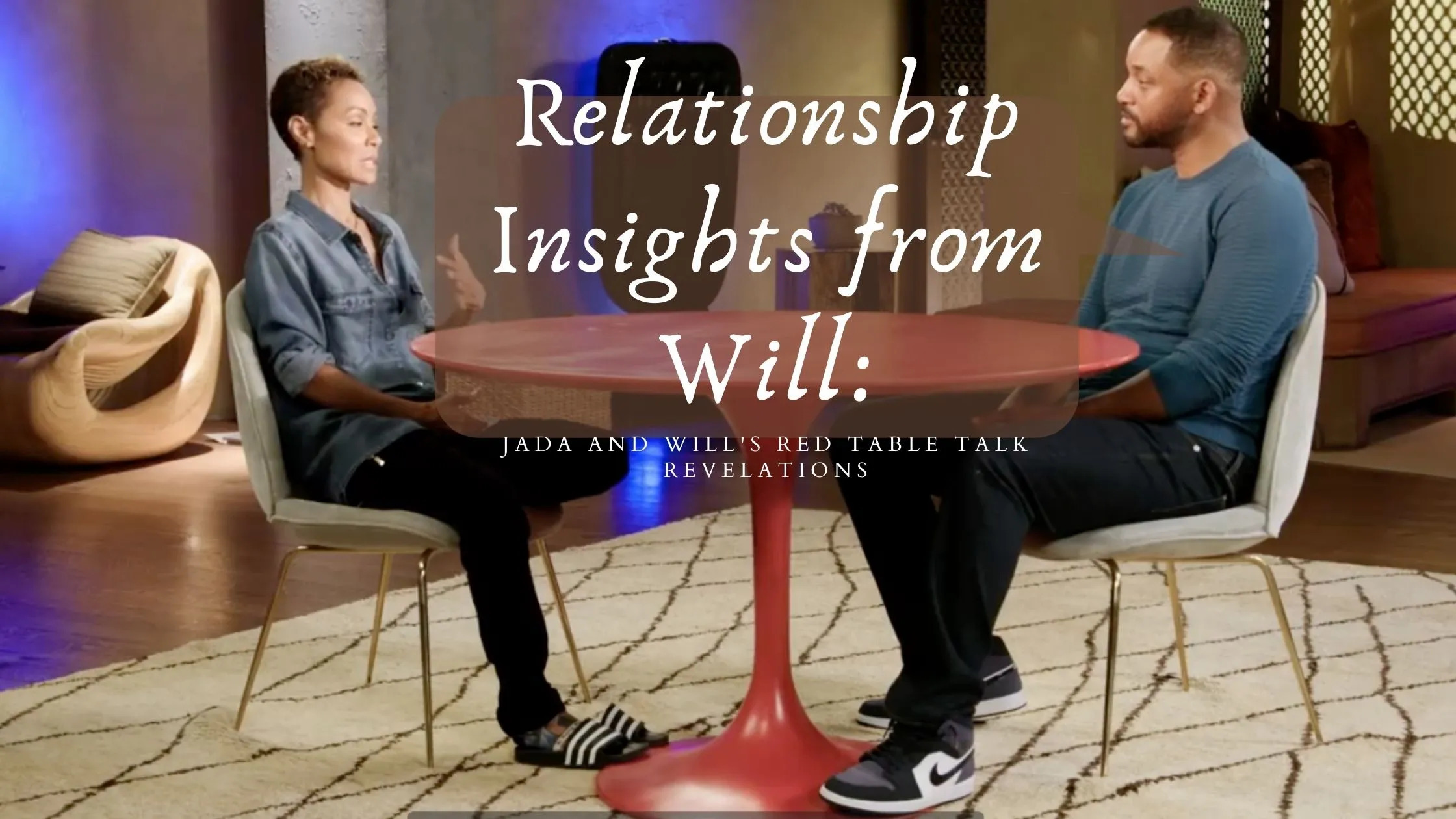 I heard comedians’ jokes about Will and Jada’s situation. Then, yesterday, as I sat in silence, ordering dinner with my bo, I caught a clip of their conversation on a feed and decided to listen. When I got home, another clip on my laptop, and I decided to watch beginning to end. Jada being called to her own Red Table Talk as it were. Will in the interviewer’s seat. I ended up appreciating their vulnerability and how they’ve come to manage their relationship. It was short and drama free. Next time, I’ll focus on insights I got from Jada. This time, there are four things Will said that I want to highlight.

“To be able to make mistakes without the fear of losing your family is so critical.”  – Will Smith

Have you ever been in a relationship where making a mistake or saying something that rubbed someone the wrong way got you damned? If it was a work environment, you might have been reprimanded, or worse. I’m not talking about things that cause the company to go under, acts of violence in a relationship, or anything illegal. These are situations where we’re simply human beings who mess up. Sometimes by complete accident and other times by way of making poor decisions without thinking through the impact the decision will have on our lives and the lives of those around us. Often, fear comes from past experiences. Whether it’s past experiences at another job or in a previous relationship; or, it’s the more recent past in your current situation, we get conditioned to know how failure and mistakes will be perceived and addressed. In some cases, it feels more like retaliation! And if you’ve been there, you already know that the fear of losing your job, or someone you love can be immobilizing. Harboring that fear has rarely, if ever, put me in a place of increasing my engagement. For me, I’ve often been left feeling as though I’m sitting on the edge of insecurity and doubt. Because I was constantly left thinking, if I make a mistake will my credibility be shot, my character judged, or my capabilities be called into question? Is this going to cause him to throw in the towel?

When I was about 15-years of age, I became aware that my dad was having an affair. Years later, as an adult, I recall having a conversation with my mother about that period in her marriage. I was in a relationship at the time and there were signs that my partner was not being faithful. My mother said to me, each situation is different, and you have to weigh a lot of things. What stage are you at in the relationship? What was the reason behind the infidelity? What have you done to work through it because there’s a good chance it can be worked through. She and my dad worked through it and lived an amazing marriage together. She said, the big things in relationships that people often view as “deal breakers” aren’t always the deal breakers, because the big things don’t happen on a regular basis. Countless times I’ve heard my mother say that sometimes you must choose between being right and being happy. The day-to-day issues that go unresolved are often what cause frustrations to mount and resentment to take hold. Those things, in my mom’s view, were the things couples needed to be aware of so they could work through them. And working through the day-to-day issues or monthly spats, had the ability to strengthen the relationship so couples could avoid experiencing the big stuff. Or, put you in a position to address the big stuff as a couple.

Recently, I watched Sara Blakely’s Masterclass. She spoke of creating a work environment that encouraged people to fail. It stemmed from growing up with a father who challenged her to be ok with failing. Knowing that she was going to be asked, “What did you fail at today” removed the fear of failure and made it an expectation that helped her gain confidence. For her failing at something and making mistakes was not associated with being incompetent, unworthy, or unlovable. It was simply part of the process of life. Time after time, I coach clients not to use the six-month or annual performance review as the place to “surprise” employees with everything they’ve not being doing correctly. Have the conversations when things arise and have the conversations from a place of, “We’re in this together and together we’ll work through it,” position rather than the “Gotcha! No here’s your punishment!” stance.

Three more of Will’s comments were, “It ain’t for the weak of heart,” “There’s a real power in knowing that somebody’s riding with you no matter what,” and “I can love you through anything.” This spoke volumes to me because the first thing I got was how much courage it takes to stay in relationship with someone. It requires strength at times when it seems it would be easier to cave in and run. I’ve been there at that fight or flight stage. Or that, I’ll call it quits before he does crossroad. If you asked a few girlfriends, you’ll hear that I’ve also been at the, whew, I probably should have gotten out of here sooner intersection, but that’s a story for another day. Courage means it might get uncomfortable and you must be willing to withstand the gale winds of discord long enough to redirect your sails. Sometimes, it’s going to be rough sailing and knowing how to navigate is the only thing that’s going to save you because you can’t control the sea!

Find the courage to ask, what can I do; or what am I not doing? Then, demonstrate the commitment necessary to make the changes? That commitment to the relationship, the other person, and yourself are what will sustain you. Are you doing what you said you would do? Are you being the person and the partner you desire to be and the one your relationship needs? Can you be counted on, especially when things are rough and perhaps even uncomfortable for you? Is your character intact? In other words, are you proud of and pleased with how you’re showing up? It does take courage to hear from someone who loves you, the things you’re doing that aren’t working for them. And it takes commitment to stand in that space and say, “We got this,” or “I got this!” I got this because I have the ability and desire to adjust on behalf of this relationship. It’s not about changing who you are, it’s about changing your behavior.

What I believe to be true is this: One person can end a relationship and we all know; you don’t need permission from the other party to do so. However, to create and sustain a healthy relationship, it takes two people willing to stand courageously in the commitment they made to one another. It takes two people willing to offer each other the grace to make mistakes without fear; and two people willing to love unconditionally. With everything going on in this world today, a pandemic that still has us quarantined, social justice nightmares, political discord and more, we still have a responsibility and the opportunity to give intentional attention to the people in our inner circle. Let’s not get lost in other people’s stuff. Let’s not use major events to hide from and ignore the things we can impact directly at home. Growth requires that we do the work.

Dr. Lisa Summerour is a speaker, personal and professional life coach, workshop facilitator, DIY enthusiast, and author of the What Went Well? Journal. The journal is designed to empower individuals by engaging them, each day, to write down what has gone well, and identify what caused the good to occur. The adult version also includes 12 months of life engaging enhancing activities.